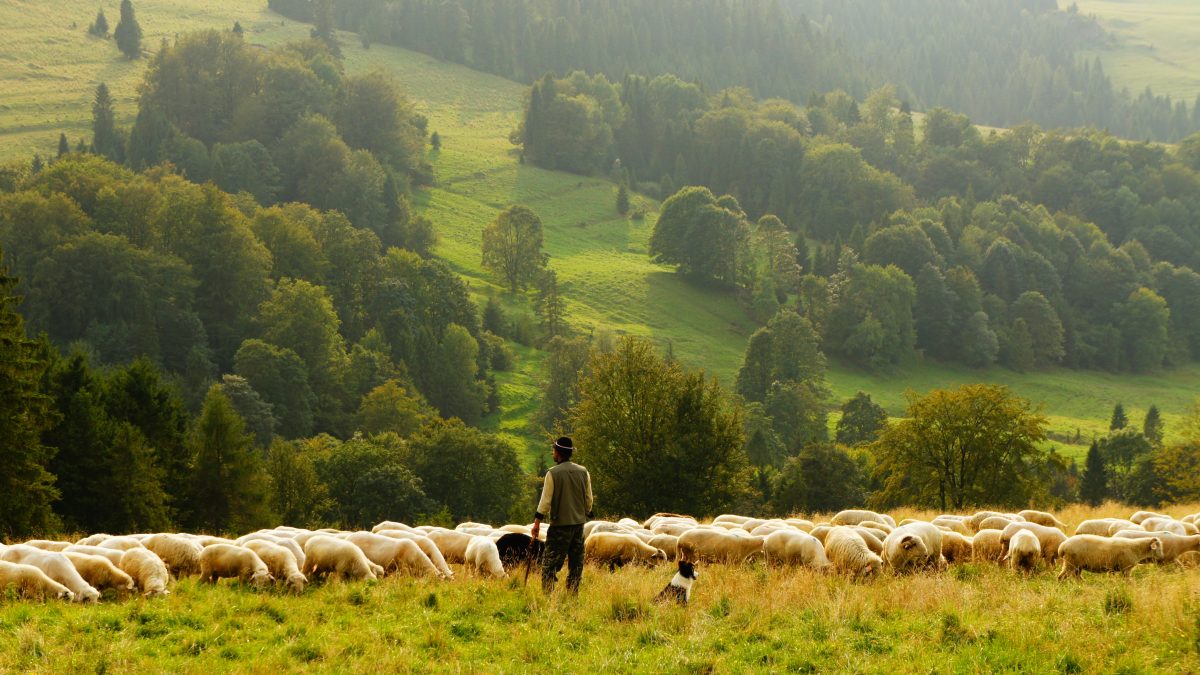 Victorian imagery has contributed significantly, in my opinion, to the sentimentalisation of Christ as the Good Shepherd. I have been looking for images of the bad shepherd – the one who climbs into the sheepfold over the wall, in order, presumably, to break open the gate from the inside and steal the sheep. He too is a shepherd. He knows what he is doing when it comes to rounding up sheep. He may have brought a particularly vicious dog to harry the sheep into submission and force them into the lorry he has backed up against the gate, so that he can transport the sheep (with little air and no water) several hundred miles away and sell them where their identification marks will pass unrecognised. Sheep rustling is not a thing of the past.

While the ethics of sheep farming may not be central to the meaning of the Gospel set for the 4th Sunday after Easter, it does invite reflection on sheep, their relevance to the Christian story today and the work of shepherding. If you live in the country you will know that sheep are not stupid. They are just conditioned to act corporately. The dog is there to divide, and so rule, when necessary. A good sheep dog, whatever its temperament, is a bully at heart. It gives unquestioning loyalty to the shepherd, and to no one else.

And what of shepherds? This is where the sheep/dog/human relationship metaphor becomes strained. Allowing for the fact that I have embellished the details of the original story, we are still required to make a leap of faith from the bucolic rural setting of hill farming to the harsh realities of authority, power and control in the organisational and family settings of modern life and, of course, in those that pertain to religion.

Sheep are corralled into a pen for the purposes of control. They need to be counted, sheared, dipped and sometimes kept safe. When applied to the life of the Christian Church, this imagery gives us permission to think of ourselves as unquestioningly compliant, not able to think for ourselves, an imagery which has been enthusiastically embraced by ecclesiastical authority over the centuries.

Seen in secular terms it sits very uneasily with ideas of democracy, consensual politics and a shared responsibility for our corporate future. It is arguable that Covid-19 has in part come about as a result of our wilful ignorance in regard to the responsibilities we share for the planet, and the exploitation of that ignorance by powerful leaders and organisations out to make money. You could, with a further stretch of the imagination, equate those who (as a result of the Covid effect on the economy) profit from hedge fund investments with the shepherd who backs the stolen sheep into his lorry and makes off with them. The hedge fund profiteers know what they are doing. The rest of us, for the most part, only wake up to it later.

But the story is not just a wake-up call for sheep or, if it is, they need to be questioning why they are being corralled into a pen in the first place. Is it really for their own good, or for the sake of cost effectiveness and efficient government? This is where the shepherd imagery merits re-examining. It seems that there is an understanding between the shepherd who guards the entrance to the pen and the sheep. Perhaps, as has been depicted in some illustrations, there is no gate to the pen, only a wide entrance. The shepherd knows when it is safe for the sheep to wander and when it is not. The sheep, for their part, trust this knowing.

Apply this idea to governments and churches and you immediately have a stark contrast between the leaders who corral their subjects, ie contain them by the forces of their own power, and those who watch out for their freedom and wellbeing, the leader who lays himself down at the entrance of the safe space that has been provided for them.

Powerful leaders do not always command the trust of those they lead, although it may take time for those under their control to realise this. Power is an aphrodisiac for the one who holds it, as well as for those they control. Both are caught up in a narcissistic process, the one needing the adulation, the other experiencing an equal need to gratify that of the leader. As a result of this mutual addiction, power hungry leaders get reinstated.

Celebrity politicians fall, for the most part, into this narcissistic category. The narcissist steals the sheep by convincing them of his own invincible hold on power through the exercise of every kind of duplicity, from personal charisma to the terrifying and often secret abuse of other human beings. When he or she is gone, history remembers little of their personal idiosyncracies, only the mesmeric power they exercised and its devastating effects. Think of leaders such as Stalin and Hitler, Pol Pot and Pinochet. We know little about them as people.

The ultimate demise of powerful and abusive leaders, including those who have abused power in the Church, comes when they are finally revealed for what they truly are. The revelation may, at times, persuade people of the need for a different kind of leadership, one that operates outside whatever corralling system exists to control and repress other human beings.

While most leaders have to work within such a system, those with genuine authority bring to it something that is capable of changing that particular controlling environment. The person with authority does not necessarily get everything right. They will make mistakes. But they will also be inherently wise, in the biblical sense; intelligent, attuned to the needs of others, quick to adapt and take advice. They will be ‘righteous’ in the fullest sense. They will bring something of themselves that has been learned through a kind of graced understanding of what is good for the people who, as they see it, they are called to serve, a spirit of service in leadership being the first sign of genuine authority. To this end, the leader with authority is the shepherd who lays down his life (or his ego) at the door of the sheepfold, now become a place of freedom and life for those whom they serve.