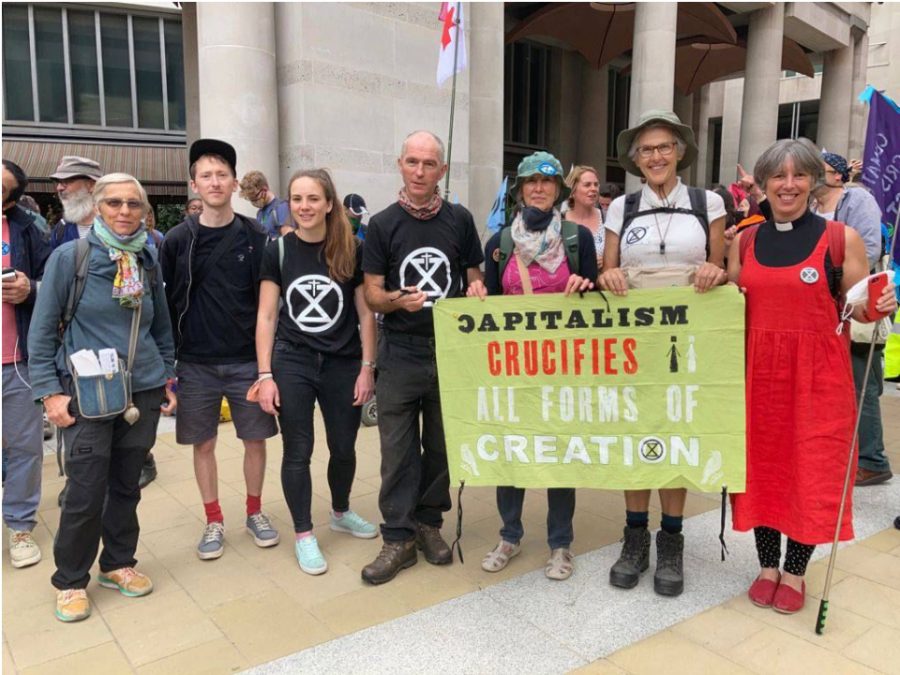 We are just over halfway through a series of protests by Extinction Rebellion, focused on London and planned to last for two weeks.

In successive days traffic was blocked and colourful displays were erected to draw attention to an environmental issue.

A huge pink table was erected a roundabout at Covent Garden. The point was:

As floods, fire and famine break out around the world, it is clear that climate breakdown is here now, and there is no choice left now but to take urgent action. Everyone deserves a seat at the table to have a say in how to tackle the greatest crisis of our times.

Cambridge Circus got blocked, protesting against the funding of fossil fuels by the Government and Barclays Bank. The following day, Oxford Circus. Police charged into the road and were surrounded by women protestors.

Next, the fountain outside Buckingham Palace was painted red in protest at the royal family’s involvement in hunting and animal agriculture.

Not one of the top 10 funders in the City has made a serious plan to exit fossil fuels, despite having pledged to go net-zero by 2050. 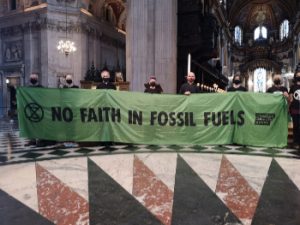 They glued themselves to railings inside London’s Science Museum, protesting against the museum’s acceptance of sponsorship money from Shell:

The fact that Shell are able to sponsor this exhibition allows them to paint themselves as part of the solution to climate change, whereas they are, of course, at the heart of the problem.

They blocked Tower Bridge with a van and a caravan, demanding an end to investment in fossil fuels:

XR are here demanding an immediate halt to all new investments in fossil fuels. It’s the obvious first step to stop making the crisis worse.

They processed from City Hall to London Bridge, using a open-top bus to block the junction. Police officers boarded the bus from the top. On Tuesday the police began using more force than before. A retired detective sergeant concluded that

Clearly they’ve got orders to use force on protesters that are trying to protest peacefully in the street. 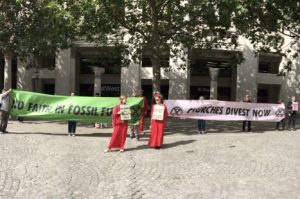 Meanwhile, last Sunday members of Christian Climate Action protested in St Paul’s Cathedral against the Church of England investing in fossil fuels. The photos here are from this protest.

And there is more to come. The links I’ve provided are all from the Guardian, partly because of the quality of its coverage but also because it isn’t behind a paywall.

Growing numbers of young people are desperately anxious about the future in store for themselves and their children, and are prepared to commit themselves to actions such as these.

As I live a long way from London I am not at all inconvenienced when the traffic is blocked there. Looking at it from a distance – not being stuck in a traffic jam – I can’t help reflecting on the different ways the story is being told by both sides. Here are a couple of quotations from the Metropolitan Police:

There will be some disruption to traffic in the area as roads are currently blocked, which we are working to reduce…

We predicted where activists might strike, taking immediate action. Throughout the past seven days, we’ve responded to several disruptive protests in London…

Like everyone else, Extinction Rebellion have the right to assemble and the right to protest. However, these rights are qualified and are to be balanced against the rights of others. They do not have the right to cause serious disruption to London’s communities and prevent them going about their lawful business. 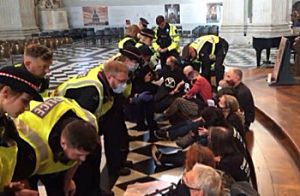 The police, of course, are acting on behalf of the Government, so these statements are best taken as expressing Government policy. From its point of view, driving cars in London is ‘lawful business’, to which drivers have a ‘right’. So when Extinction Rebellion parks a bus on a busy road junction with deliberate intent to block the traffic, their action is ‘disruptive’.

Extinction Rebellion, on the other hand, think it’s the other way round. Yes, they did disrupt the traffic – because the whole of Planet Earth is being disrupted! If there is a case for stopping the activists disrupting the traffic, there is a much stronger and more urgent case for stopping the Government disrupting the environment we all depend on.

What about the right of drivers to go about their ‘lawful business’? This is a positive right: that is, a right granted by the Government and conditional on Government permission.

Today, many people really do need to drive a car. Otherwise they wouldn’t get paid. To them, driving probably feels like a normal part of life. Drivers who get stuck in the traffic because of the protests are likely to feel their normal life is being disrupted, and I guess many feel outraged. To the extent that they feel like that, the police actions are on their behalf. The police enact Government policy to prioritise ‘normal’ traffic flow regardless of Extinction Rebellion’s claims.

The trouble is, there is no truth in it. Driving cars isn’t really normal at all. It isn’t built into the nature of human life, let alone the world. It isn’t a natural right or a human right. Cars were invented just over a century ago. Most people in the world don’t have one, but those on the roads already cause a large part of the environmental crisis. Cars are the result of Government decisions over the last century. They could have made different decisions, with a different planning system and different forms of transport.

From Extinction Rebellion’s point of view, the disruption caused by the protests is nothing compared to the disruption our present lifestyle is causing to the environment. Not getting to work because the road was blocked isn’t on the same scale of inconvenience as your house being flooded or burnt down in a forest fire.

Our car culture, with its smelly, polluted and dangerous cities, has grown over a few generations. Children are taught to be careful on the roads. They take the traffic to be normal. As they grow older they adapt to even more traffic, and teach their children in turn. Gradually, we have come to accept this highly artificial lifestyle as though it was normal. It isn’t.

Unfortunately, the people instructing the police to arrest the protestors are the people who will represent us at COP 26.

In 50 years’ time those still alive will look back on today and wonder why we were so slow to change. We need to find a better normal, a normal that doesn’t disrupt, a normal that celebrates and protects the clean and safe environment we were given.