Martyn Percy: Embrace the “Tutufication” of the Church of England Part 3 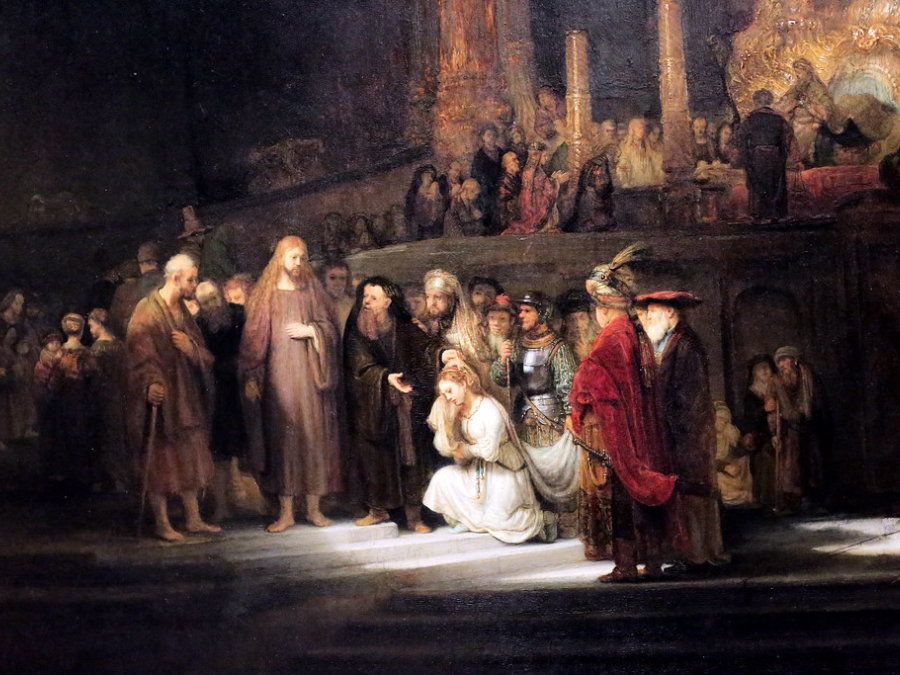 Rembrandt, The Woman Taken in Adultery, 1644

In my last post I described the story about the second century healer Apollonius of Tyana, and how René Girard analysed it as a scapegoating process.

Girard then proceeded to contrast it with a story about Jesus, which sticks in my mind: the one about the woman caught committing adultery.

The scribes and the Pharisees brought a woman who had been caught in adultery; and making her stand before all of them, they said to him, ‘Teacher, this woman was caught in the very act of committing adultery. Now in the law Moses commanded us to stone such women. Now what do you say?’ They said this to test him, so that they might have some charge to bring against him. Jesus bent down and wrote with his finger on the ground. When they kept on questioning him, he straightened up and said to them, ‘Let anyone among you who is without sin be the first to throw a stone at her.’ And once again he bent down and wrote on the ground. When they heard it, they went away, one by one, beginning with the elders; and Jesus was left alone with the woman standing before him. Jesus straightened up and said to her, ‘Woman, where are they? Has no one condemned you?’ She said, ‘No one, sir.’ And Jesus said, ‘Neither do I condemn you. Go your way, and from now on do not sin again (John 8:3-11).

The first thing we might notice is that a man must have been caught doing it with her – and yet he isn’t even mentioned, let alone threatened with a stoning.

Stoning for adultery in the Bible

So before picking up Girard’s argument, let’s look at what ‘Moses commanded’: that is, the laws in the first five books of the Bible. Leviticus 20:10:

If a man commits adultery with the wife of his neighbour, both the adulterer and the adulteress shall be put to death.

What could be simpler? But Deuteronomy 22 goes into detail. It depends. If, the day after a wedding, the bridegroom says the bride wasn’t a virgin, the verdict is determined by the evidence:

They shall spread out the cloth before the elders of the town.

If blood is there he has lied. He is fined, and the money given to her father. As for the marriage,

She shall remain his wife; he shall not be permitted to divorce her as long as he lives.

If no blood was there – so she really wasn’t a virgin – she is to be stoned to death.

If a man meets a virgin who is not engaged, and seizes her and lies with her, and they are caught in the act, the man who lay with her shall give fifty shekels of silver to the young woman’s father, and she shall become his wife. Because he violated her he shall not be permitted to divorce her as long as he lives.

To me, two things stand out as exceptionally horrific: the stoning, and obliging a woman to spend her life with her rapist. But I’m not an ancient Hebrew, and rather glad not to be.

There is only one case in which only the woman is to be stoned: the instance of the unsatisfying bride the day after the wedding. This is not the case in the story from John’s gospel. So the people who wanted her stoned seem to have been exaggerating what ‘Moses commanded’.

Back to Girard. He explores the contrast between this story and the Apollonius one. In the Apollonius story the crowd saw a harmless beggar. They disliked the idea of stoning him. Apollonius had to urge them on until eventually one threw the first stone. Then the others joined in.

In the Jesus story the mood was the other way round. The denouncers wanted her stoned. Maybe they only cared about catching Jesus out, and didn’t really care whether she got stoned. But as the story is told, they presented Jesus with the scriptural case for executing her, by stoning, on the spot. Jesus did the opposite of Apollonius: he persuaded them not to stone her.

Apart from the scapegoating theme, Girard is best known for his mimetic theory, describing how we emulate other people. He expressed this in a focus on the first stone.

In the “miracle” of Apollonius the first stone is plainly the principal worry of the guru, since no Ephesian has the resolve to cast it…

The first stone is the most difficult one to throw, because it has no model. To persuade them, he demonises the victim:

With a ridiculous grandiloquence he denounces the beggar as an “enemy of the gods”.

Jesus, in order to prevent a stoning, explicitly draws attention to the first stone. Indeed,

It is this very story of the woman taken in adultery and saved from stoning that has made “casting the first stone” proverbial.

We are a mixed bunch. Most of us, most of the time, follow the lead of people around us. If our community thinks adultresses should be stoned to death, we join in.

But not everyone follows the crowd. There are also those who think things through for themselves, and take a lead in promoting changes to the community’s values. Some of them derive their values from whatever principles are available to them. These include professional ethicists, but also individuals with the kind of logical mind that spots errors in what everybody else is saying. Others respond to their emotions, crying out that something is absolutely wrong.

Then there are those who use their own self-interest to promote the values they want other people to have. Perhaps the most obvious example is the owners of newspapers. Even this has a theoretical defence: Emotivism, the theory that all moral discourse really only boils down to psychological manipulation.

In all these ways every society is constantly being pushed one way or another by its minorities. Majority opinion changes, for better or for worse depending on whose voices are loudest. An obvious example is how majority opinion has stopped condemning gays. It took decades of campaigning to get here and there is still more to do, but the achievement has rescued millions from oppression.

Modern society, like first century Judea, has minorities it loves to demonise. We need more people who think their values through from first principles, more people determined to resist the allure of self-interest, more people prepared to stand up against public opinion when it is led astray. This story about the adulterous woman shows that Jesus was one of them. I know it’s a cliché to say we need more people like Jesus, but we do.