Why were the healings of Jesus so controversial?

The Church Must Die To Its Self 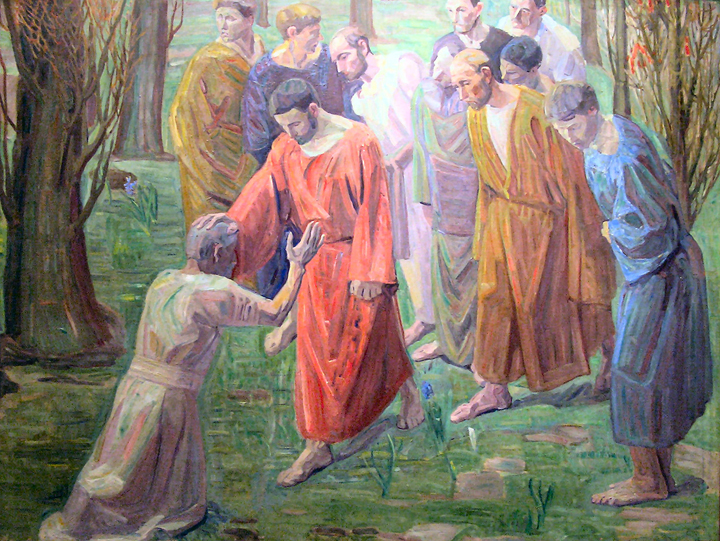 Stevns, Niels Larsen, 1864-1941. Healing of a Leper, from Art in the Christian Tradition, a project of the Vanderbilt Divinity Library, Nashville, TN

In my last post I described how the healings Jesus did were the kinds of things traditional healers do. In general, what the gospels report may seem strange to those used to modern western medicine, but it is common all over the world.

However they describe something else as well. Jesus did his healing not only in that traditional context, but also in the context of official Jewish teaching. Jews had a distinctive tradition, quite different from their neighbours. Jesus undermined it.

In the ancient near east the majority view was that illness is caused by evil spirits. Medics produced lists of the different illnesses, which evil spirit caused each one and how to exorcise it. Typically the exorcism was a speech threatening the evil spirit, combined with some kind of herbal remedy which might indeed have helped.

We shouldn’t knock it too much. Before the invention of the microscope nobody could see germs or viruses. They might as well have called them spirits. The difference lies in what those spirits were like. Their general assumption, unlike ours, was that evil spirits were self-willed agents, either deliberately being nasty or too stupid to know what they were doing. Everybody took for granted that they were surrounded by evil spirits.

There was one exception. The Hebrew scriptures, known to Christians as the Old Testament, has only a couple of evil spirits, and even they did nothing without God’s permission. Those writings are quite emphatic that there is only one god. What is wrong with the world is the evil done by humans, who are allowed to disobey God.

The commitment to only one god broke down over time. The Apocrypha has a hilarious story of one exorcist who got rid of an evil spirit by burning the liver and heart of a fish (Tobit 6-8). The smell was so horrible that the evil spirit ran away, thousands of miles from Iran to Egypt. The Gospels describe Jesus doing exorcisms. What Jesus made of those evil spirits is debated. I don’t believe in them. There is a case for arguing that Jesus didn’t either, but we don’t know.

The temple at Jerusalem still maintained the official Jewish theory that there is only one god. In my view they were right about this. But: why, then, does God allow illness? Their answer – and this is where I disagree with them – was that illness is God’s punishment for sin. Psalm 37:25:

I have been young, and now am old, yet I have not seen the righteous forsaken or their children begging bread.

Really? Other people had seen the righteous forsaken! The Book of Job agonises over this problem.

In Jesus’ day Israel was part of the Roman empire. The Romans demanded such high taxes that lots of people were starving. Many were suffering illnesses caused by malnutrition. But according to the Jerusalem temple system, your illness must have been caused by the fact that you committed a sin.

So instead of doctors they had priests. To get better you needed to be forgiven for your sin. You would go to the priests at the temple in Jerusalem and offer a sacrifice. After the sacrifice the priest would pronounce God’s forgiveness. Then you were supposed to get better, because God had forgiven you. That was the official Jewish system at the time.

From where Jesus lived the temple was about 100 miles away. No trains! Some would have a donkey. Otherwise you walk.

The sacrifices were expensive. Even if you were only sacrificing a couple of pigeons, you wouldn’t want to carry them all that way. You buy them when you get to Jerusalem. So you pay tourist prices. The temple funds did very well out of the system, at the expense of Jews who were ill.

So the Jewish tradition began with the positive message that there is only one god who creates us to bless us, and we have nothing to fear from evil spirits; and they turned it into a highly successful money-earner at the expense of people who were ill.

This is why Jesus’ healings were so controversial. He told people who were ill that God accepted them as they were, forgave them for any sin, and didn’t hold it against them. To be relieved of that sense of guilt was an important element of the healing.

Jesus didn’t even tell them to offer sacrifices. In this way he undermined the economy of the temple. Financially, the Temple authorities had good reason to get him killed.

Why can’t we all be healthier?

What we mean by good health depends on what we expect from life. Our bodies are designed – through a long evolutionary process – to live well in certain ways. The Hebrew scriptures were right about that. Every society, though, imposes expectations; and when these expectations don’t fit the way our bodies are designed, they cause distress and illness.

When we can’t meet the expectations other people have of us, we often feel guilty. Those temple priests at Jerusalem were not the only ones. I have had dealings with charismatic churches confident that they can offer healing. When the person isn’t healed, they were told it must have been because they didn’t have enough faith. So in addition to their illness they got guilt.

That same guilt-inducing process is generated, on a much bigger scale, by the expectations of our modern western society. Its obsession with agendas like new technologies and economic growth imposes extra burdens on us which are completely unnecessary. To promote these agendas it exaggerates the value of hard work. The greatest praise accorded to public figures these days is that they are ‘hard-working’. We get pressurised to achieve more than our bodies are designed for. Faced with all this it is hardly surprising that so many of us feel inadequate, guilty and ill.

None of this is inevitable. When we disapprove of other people’s actions we take for granted that they could have acted differently. They were not governed by evil spirits, or by any other determinist forces. Right now millions are suffering because of the war in Ukraine. If Putin had no free will or was driven by an evil spirit, then that war would have been inevitable. There would have been nothing anyone could do to stop it. But he could have acted differently. The biblical tradition that Jesus upheld accepts that the ability to disobey God is given to humans.

Just like Putin, you and I are given a moral task: to overcome our self-centredness for the sake of the common good. It can be done, and therefore we have hope.