Billionaires in space: progress or crime? 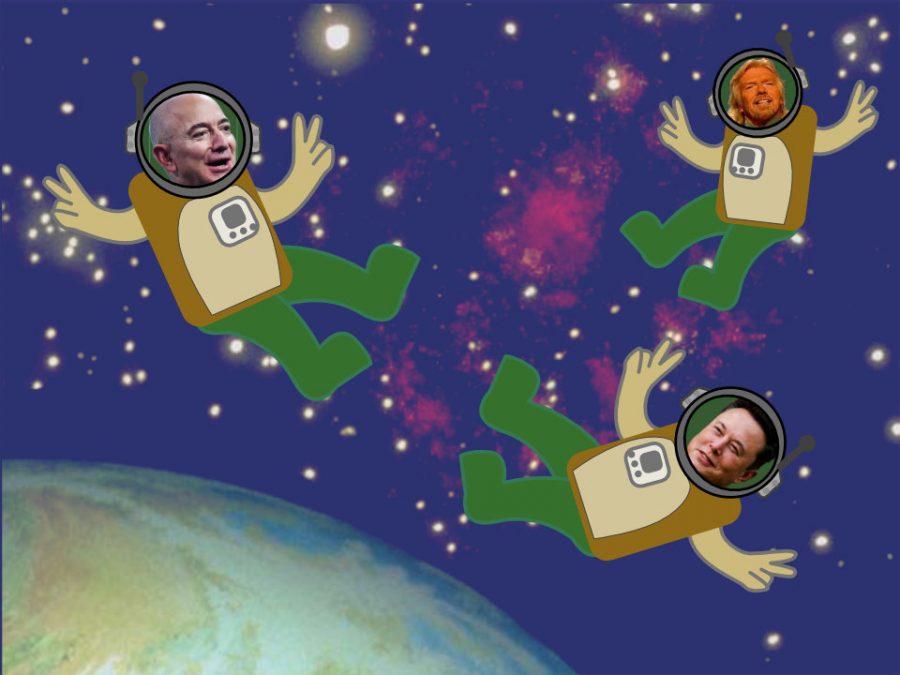 Space travel is back. Not, this time, as a ‘space race’ between superpowers, but as a leisure activity for billionaires.

Is it a step forward? Towards what? Are we impressed? Jealous? Should we be? Does it matter?

Here’s James Pethokoukis’ summary in The Week on 16th July:

Virgin Galactic founder Richard Branson took a rocket plane to space (kind of) last week, while Amazon founder Jeff Bezos is scheduled to head into space on a Blue Origin rocket on Tuesday. And, of course, Elon Musk’s SpaceX has energized the commercial space industry by lowering launch costs, while also returning the U.S. to human spaceflight. And Bezos and Musk both have broader ambitions to turn humanity into a space-faring civilization where millions of us are living and working in Earth orbit and beyond.

Pethokoukis thinks that is because

He acknowledges opposition. A young black American responded to the Apollo moon landing with:

The cash they wasted, as far as I’m concerned, in getting to the Moon could have been used to feed poor Black people.

Here on Earth, in the richest country on the planet, half our people live paycheck to paycheck, people are struggling to feed themselves, struggling to see a doctor — but hey, the richest guys in the world are off in outer space! Yes. It’s time to tax the billionaires.

To Pethokoukis, this is just

the long-time anti-space sentiment of the far left.

reveal a poor sense of economic history. The Next Big Thing often starts out as a toy or as a plaything of the rich.

What do we value?

The debate reveals a deep conflict of values. What is worth doing? What is the point of what we humans get up to? Modern industrial society is driven by an agenda that demands change. Progress, according to most governments and business leaders, is about ‘development’ – producing new technologies to replace what nature provided. As for countries that haven’t done this as much as us, we used to call them ‘primitive’ or ‘backward’. Later we called them ‘undeveloped’. Today it’s more polite to call them ‘developing’ – as though the rest of the world is struggling to become like us.

To others – including me – it’s far from self-evident that this is a valuable process at all. It lies behind most environmental destruction. It gives some people a more comfortable life, but at the expense of others.

So where did what the article calls the ‘far left’ get its hostility from? It could have come from the Bible, the Qu’ran, Buddhism, the shamans of Africa, Russia, America – or any people who are hungry and would prefer the resources to be spent on food. To the extent that Pethokoukis represents the values now dominating our society, we seem to have reached the stage where the world’s older philosophical and spiritual traditions can all be lumped together as ‘far left’.

How does getting into space constitute progress? Pethokoukis just gives it a blank cheque: we don’t know what will result, but something will.

In my more generous moments I think of those people’s desire for space travel as a bit of childish immaturity. Maybe one day they will grow up.

But then I remember how they became rich: by using their power to benefit themselves at the expense of other people. Accumulating so much money for themselves that they can pay for a trip into space may be legal, but morally it’s a crime.

Excessive wealth, like climate change, has a tipping point. If you are a little better off than the average you can think of a few extras you would like. When you are a lot better off you invent justifications. You imagine you have worked harder than other people. Or you tell yourself you are a superior type of person. You find ways to blame the poor for their poverty. Or, worst of all, you suppress your caring instincts and practice the art of only caring for yourself. Once these justifications kick in, there is no limit to your greed.

Capitalism, in its current neo-liberal form, is the socially approved justification. We humans are designed, through biological evolution, with two desires in tension: to look after ourselves, and to care for others. Neo-liberal capitalism argues that if we all concentrate on looking after ourselves all will be well. Nearly all the world’s other moral traditions teach the opposite: that we are at our best when we care for each other.

Of course, public displays of wasteful expenditure are as old as history. Past conquerors grabbed looty from the vanquished and spent it on showing off. Today, when self-interest is praised as a good thing in itself, wealth gets spent just to show that its owners are one up on the neighbours. For some, buying a Jaguar instead of a Honda does it. For those billionaires, getting into space does it.