Can we justify our values? 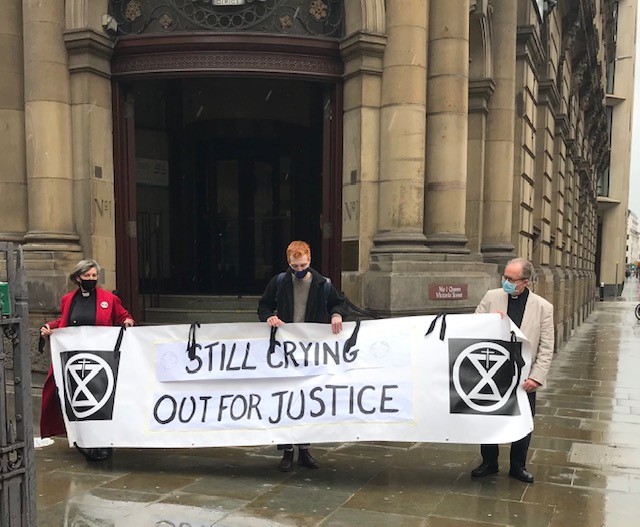 Rev’d Helen Burnett is a member of the Council of Modern Church and has written the following, which details her ongoing work with XR.

There has been a stream of Christians through City of London Magistrates Court , lay and ordained, this week. They must be thoroughly sick of us!

All answering charges for NVDA at various XR protests.

Four Christian Climate Action members in the past week have glued themselves on in court as a protest at the courts refusal to allow the defence of Articles 9,10 and 11 of the ECHR – and exactly the same happened to me today – the refusal to accept the defence not the gluing on!

Of the 4 two discharged under investigation for contempt, 2 sent straight to Wandsworth Prison for contempt . Both released today on probation, one having been on hunger strike the entire time.

This is amazing Christian witness – there was a small article in The Times at the weekend but nothing else…..

This is the first week of Passiontide, a time in the Christian year when the truth is revealed and this trial began with an oath on a bible – the sacred text that teaches a radical way of love and which includes the account of Jesus before Pilate when he famously replied ‘what is truth’ before falling silent in the face of a justice system that had nothing of real truth and justice to offer him.

Well, I’m afraid you are not going to have silence from me and I hope you can offer more than Pilate.

Here is my truth, the truth of thousands of activists, and of the truth of millions too busy trying to survive, too busy grieving, too busy coping with the real live effects of the climate and ecological emergency.

On Oct 7th 2019 I was sitting on the ground, for that brief spell, a small patch of Millbank was holy ground; holy ground being held against all odds, against the state, against ecocide, against corporate power, against self – serving politics, against a fossil fuel economy and against all that contrives to damage our earth and its fragile web of life………………..

against all that desecrates the sacred

And for a brief moment there was full autonomy, I held tight to love and to a tenacious hope.

What a contrast to this space……………

Mark and I stand before you, 2 priests, people of faith who sat in the road for their beliefs.

We stand here charged and brought to court, while governments and corporations go unchallenged on countless charges of Ecocide.

During the course of that day on Oct 17th  I gave an interview to the Daily Telegraph, to Christian Premier radio, spoke alongside representatives of faith based NGO’s, prayed in a multi faith gathering on  a bridge that was blocked by the police helped to carry an  enormous ark – a striking symbol of hope in the face of despair.

I had multiple conversations with multiple people who love and care for this planet and the people who live on it, and then I sat with people I’d never met before in solidarity with our neighbours on the other side of the globe.

And I prayed, prayed in the deepest most profound way that happens, only when all else seems lost and we touch the very heart of the matter.

What kind of a mad world is it that has 2 vicars who can see and understand the catastrophic harm to human, animal and plant life that is the climate catastrophe standing in a dock before you for telling the truth about an existential threat.

We have looked into the abyss, seen the despair, and our hope is to find agency in whatever way we can through action and contemplation to do something before we die for a world that is dying.

As I prayed a young woman sang Bread and Roses –  I want bread and roses for the world – beauty and sustenance, a sharing of life’s glories, glories that should be available to all.

A stranger prayed for me, and blessed me, and a police officer repeatedly said that he didn’t want to arrest me, called me padre and begged me to desist because his girlfriend would never forgive him for arresting me.

Today, 17 months later it is my eldest son’s 30th birthday, he is living through a pandemic that is caused by the catastrophic effects of the minority world lifestyle.

In the course of his life I have marched, signed petitions, written letters, educated myself, and many others and been a teacher, mother and priest.

That vocation commits me to the fierce love and protection of my children, and of, by extension the children of the world.

As a priest in the Anglican Communion my vocation brings a commitment to the 5th mark of mission, which is :

‘to strive to safeguard the integrity of creation, and sustain and renew the life of the earth’

This duty I hold in common with Christians across the globe linked by a faith that demands love for neighbour an, where necessary, demands personal sacrifice.

As vicars we have the ‘cure of the souls’ – that’s not some mere ephemera that flies off to heaven – it is the fully integrated body and spirit – the spiritual and physical well-being of the people in our parishes.

With a care also for creation that then extends to the soil, the trees, and all that lies within our parish.

I am called to pastoral care for people and planet in the place of my work in the parish of Chaldon where I preach that we must love our neighbour and that our neighbour is not just the person we can see, but the person we cannot see, in Bangladesh, in the Niger Delta, in the Maldives, where people are suffering as we speak from catastrophic climate change – on their behalf I claim immediate and urgent necessity

They are my neighbour; to pass by on the other side as a member of the minority world that created the catastrophe, is not an option…….

my faith compels me to love my neighbour, to cross over even went it is dangerous to do so; not to turn a blind eye to the truth and pass by on the other side

By demanding action on climate change I am exercising my faith, by praying as I take action, I am exercising my right to freedom of worship in article 9 of the European Convention on Human Rights. and to assemble with others in solidarity under Article 11 of the same convention.

When governments won’t listen, when profit is the golden calf and we commodify every part of the planet, when we are crucifying our earth, a crucified earth will not have a risen life; on the current trajectory this crucified earth will come to an end and take with it millions of souls for whom I wish to advocate, the imperative must be to act.

That imperative to love ferociously culminated for me  in a moment of deep clarity and deep prayer on Monday October 7th 2019.

I knew that all that all I had left at that moment between myself and the appalling climate injustice of this world, was my body to place between the oncoming disaster, and the powers that be, my body, on the line, in the face of the social and economic structures that prevail, in the face of systemic refusal to face this disaster with honesty and with immediate action.

And so I prayed and my prayer was protest, that is a right enshrined in law a right to be exercised in an emergency.

I did this on behalf of those who are in immediate danger and I did this for my own children and godchildren, for the children in my church and in my school, all of whom will witness in their lifetimes what happens beyond the cliff edge.

Ultimately, my faith and my understanding of the world convinces me that love must prevail.

So, today when secular laws fail in their duty to protect our earth I am compelled to turn to a higher moral and spiritual authority, this court could have the courage and the capacity to do the same….

Yes 17 months ago I sat in the road, it was a tiny miniscule moment in the greater scheme of things and since when no change has been effected, it was my only remaining option in the face of massive negligence.

I will close now with the words of the late Polly Higgins:

“The rules of our world are laws, and they can be changed. Laws can restrict or they can enable. What matters is what they serve. Many of the laws in our world serve property – they are based on ownership. But imagine a law that has a higher moral authority… a law that puts people and planet first. Imagine a law that starts from first do no harm, that stops this dangerous game and takes us to a place of safety….” Polly Higgins, 2015

Will this court begin that journey towards a place of safety for all people today?