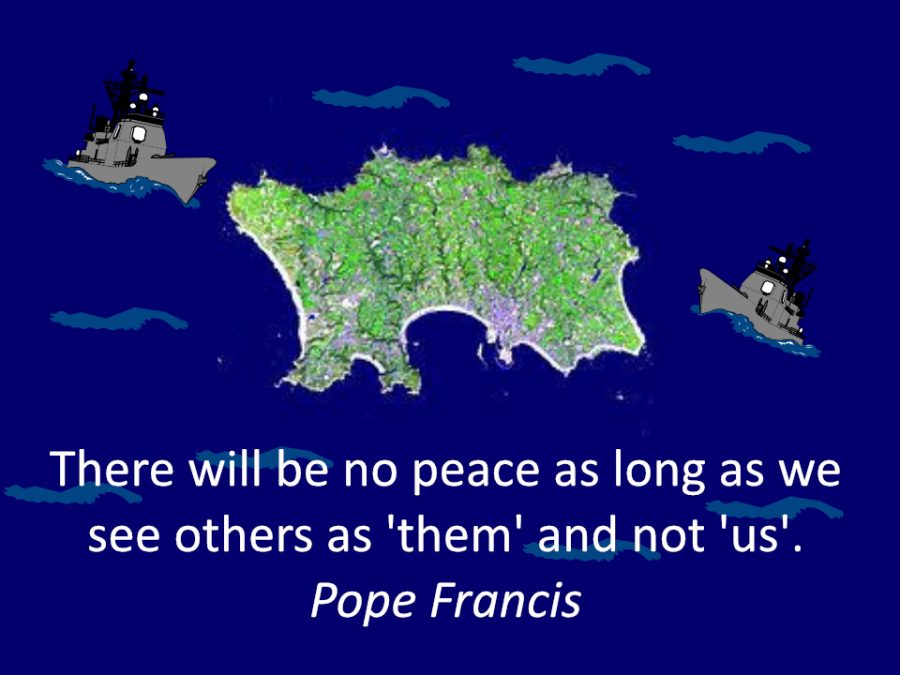 ‘Acting like Putin’, declares the Daily Express, ‘Macron shamed for Jersey chaos as MP warns of plans to ‘up the ante’. ‘Flare up’ says the Sun: ‘French Navy races to Jersey amid tensions over “act of war” blockade by 100 ships’. ‘Your Move Macron’ declares the Daily Mail about the ‘dramatic escalation of conflict with Paris over post-Brexit fisheries’.

Perhaps the fuss over Jersey fishing rights is an inevitable result of Brexit. But the way governments handle it tells us a lot about their values – and, consequently, about the values of the people who vote for them. The issue could have been handled by civil servants on both sides quietly plodding through the details to find a settlement, as they did with most of the Brexit details. But that would be boring. The prospect of war is exciting! It gets the adrenalin flowing. We find ourselves supporting whoever leads for our side with the biggest swagger. Especially if we don’t live in Jersey and don’t earn our living by fishing.

As it happens I have just read an appreciation of Angela Merkel by Virginia Moffatt. I’m not a fan of Merkel’s politics and I don’t know anything about her personally, but the following remarks make a telling contrast.

During these eighteen years of her leadership no transgressions were recorded against her. She did not assign any of her relatives to a government post. She did not claim that she was the maker of glories. She did not get millions in payment, she did not receive charters and pledges, she did not fight those who preceded her. At a press conference, a female Journalist asked Merkel: ‘We notice that you’re wearing the same suit, don’t you have any other?’ She replied: ‘I am a government employee and not a model’. Mrs. Merkel lives in a normal apartment like any other citizen.

I am convinced that an important part of the difference is war. People who lose wars learn lessons. They like the idea of different nations living together in peace. After 1945 Germans turned away from racist theories of superiority. Britain, while blaming Germany for a racism which it had previously shared, maintained the sense of superiority it had inherited from its empire. I, like many of my generation, was taught history at school on the basis that for Britain to win wars and acquire an empire was a good thing.

Because this imperialist culture is still there, the prospect of a naval battle over Jersey presses a button. It revives that unspoken assumption that Britain has always won in the past and would win again. The people running Britain acquire a sense of self-importance. German culture, aware of what it’s like to lose, sees things differently.

Our obsession with competitiveness depends in turn on an evolutionary philosophy of humanity which owes more to Herbert Spencer than to Charles Darwin. If we have become what we are by ‘the survival of the fittest’, it seems that we exist because we survived, and therefore must be fitter than those who didn’t. It’s a theory of progress in which killing other people shows that you are fitter than them, and therefore were right to kill them.

Philosophically this is indefensible. It’s just a circular argument. But at a popular level it serves its purpose by telling the powerful they are right to destroy the powerless.

There is an alternative, but it depends on listening to the voices of the losers. I am most familiar with the Christian version, but it exists in all the major faith traditions. (Every faith tradition has also had warmongering leaders, but that’s because they failed to live up to their tradition’s best insights.) We have been designed in such a way that we could all live at our best by living in peace and harmony with each other. Rather than competing against each other we should co-operate. This in turn means that, rather than claiming any kind of superiority for ourselves or our nation, we recognise equality of value. Regardless of nationality, we all have human needs, fears and hopes. Nobody needs to be an enemy.

So do we look forward to conflict with France over Jersey, or do we think that would be a tragedy? Which would we prefer: supremacy or harmony?