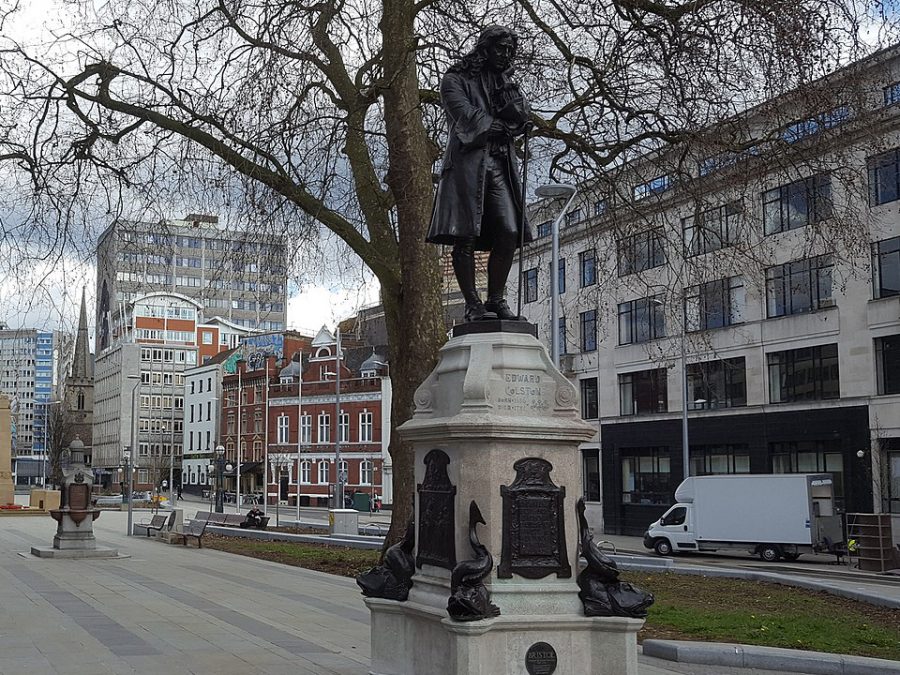 The statue of Edward Colston before it was pulled down. Photo by RedSquirrel via Wikimedia

Should we pull down statues of slave traders?

Statues to individuals are erected to honour them. They express the values of the people who put them up. They are a way of saying ‘here is a person who deserves honour’. Destroying them expresses different values. All through history statues have been erected and pulled down. I confess that I would have loved to be at that quayside when Colston’s statue fell into the water.

This post is about the general principle. I shall refer to Edward Colston rather than anyone else, partly because 60 years ago I took the entrance exam to Colston Boys’ School in Bristol. I was sent elsewhere, but I guess that if I had gone there I wouldn’t have been taught about the evils of slavery.

Some information about Colston is here. He died in 1721. The statue is a different story, told here, erected in 1895 by businessmen who chose him to be a mascot of Bristol’s prosperity. For the purposes of this post, suffice it to say that Colston was a businessman who made money through trading slaves and spent it on ‘philanthropic’ endowments to the city of Bristol – including that school.

Why not commemorate the philanthropic work even though he was a slave trader? After all, if we put up statues only to people who didn’t have a dark side, there would be no statues at all.

Because they are the two sides of the same coin. He wouldn’t have been able to make those endowments if he hadn’t made that money.

Would it have been better if he hadn’t traded slaves, hadn’t made lots of money, and hadn’t given his endowments? The answer must surely be yes. If he had had an uneventful life, making less money and having nothing of interest to show for it, had never had statues erected to him or buildings and streets named after him, yes, that would have been much better all round.

Was slavery okay in the past?

Such people are often defended on the ground that we shouldn’t judge past ages by our standards. We, after all, will be judged harshly by future generations, at the very least for trashing the planet. Slavery, we are often told, was not considered wrong at the time.

I don’t buy it. To say that it wasn’t considered wrong is to hear only the voices of the ruling classes. History is written by the winners. The views of dissidents and slaves have been written out of the narrative. Colston and his fellow-traders cannot have been ignorant of the cruelties they were imposing. The belief that there was nothing wrong with it was a cultivated belief, a belief formed and maintained by a rich elite determined to defend the system because they made so much money out of it.

Should we nevertheless applaud the philanthropy? I think not. Here I turn to my Christian sense of justice.

Philanthropy has a history. In ancient times, before money was invented, every society had codes of expectation about giving and receiving. If we are social equals, and I give something to you, there is an expectation that you will give something roughly equivalent to me. If you are socially superior to me, my gift to you is not expected to equal your gift to me, but I am still due to make some act of gratitude – along with due deference.

I have just been reading Peter Brown’s Power and Persuasion in Late Antiquity, which gives substance to the issue. By the fourth and fifth centuries AD the Roman Empire did have money, but it was very unequally distributed. The tradition of philanthropy reinforced the pecking order. The leading notables of each city were expected to make generous gifts to their citizens. Gifts would take the form of public entertainment, buildings or food. Most citizens could not reciprocate with material gifts, but they could escort the notables in procession, show deference, make speeches praising them, and erect statues of them.

‘Philanthropy’ is a Greek word meaning ‘love of humanity’. Love of humanity it was not: it was a bargain, in which the rich person gained the public adulation he craved in return for spending money on the citizens. This kind of giving by the rich reinforced society’s acceptance of extreme inequality.

Brown then describes how it was challenged. The bargain was between the notables and the citizens of the city. The homeless, the refugees and the destitute were not part of it. They neither received anything, nor were expected to take part in the processions. The only rich people who gave anything to them were the Christian bishops.

Why Christians should care about the homeless and destitute is of course written in the pages of the Bible. I have often referred to it; here I shall just compare the narratives. For the pagan city notables, the unit of concern was the citizens of the city. The rhetoric was about love of the city and the desire to honour it. Like all forms of patriotism, it drew boundaries between insiders and outsiders. For the Christian bishops, the unit of concern was much wider: the human race had been created by God and was due the necessities of life.

In this way Christians challenged the corridors of power. Thereafter pagan city notables, seeing where the power was going, were often tempted to follow it and become Christian bishops themselves. With bishops like them, Christianity gradually lost its radical edge. Today many church leaders are not even aware that Christianity began as a radical movement.

Back to Colston. And Rhodes, and all the others. Even if the money had been made in a less objectionable manner, the endowing is still a top-down process, a de haut en bas. It reinforces inequality. It declares ‘I am doing this because I am such a generous person’. It expects deference.

From a Christian perspective the generosity comes from God, who provides for everyone. Justice therefore demands that the wealth should provide adequately for everyone. When the rich give to the poor, they are taking a step towards correcting an injustice. When they do it as an act of philanthropy, they never do it enough. They always leave themselves a lot richer than the poor and enslaved. Philanthropic giving may be a step towards justice, but it is not justice.

Who deserves a statue?

Who, then, deserves a statue? To whom should we put one up?

What about all those health workers who helped nurse and treat Covid-19 sufferers, caught the virus as a result, and died from it? How about putting up statues of them? These, after all, are people who deserve our respect, examples of a good life.

It’s crazy. We know it will never happen. Those are not the kinds of people to be honoured with statues.

Why not? What is it about our society that we honour the wrong people?