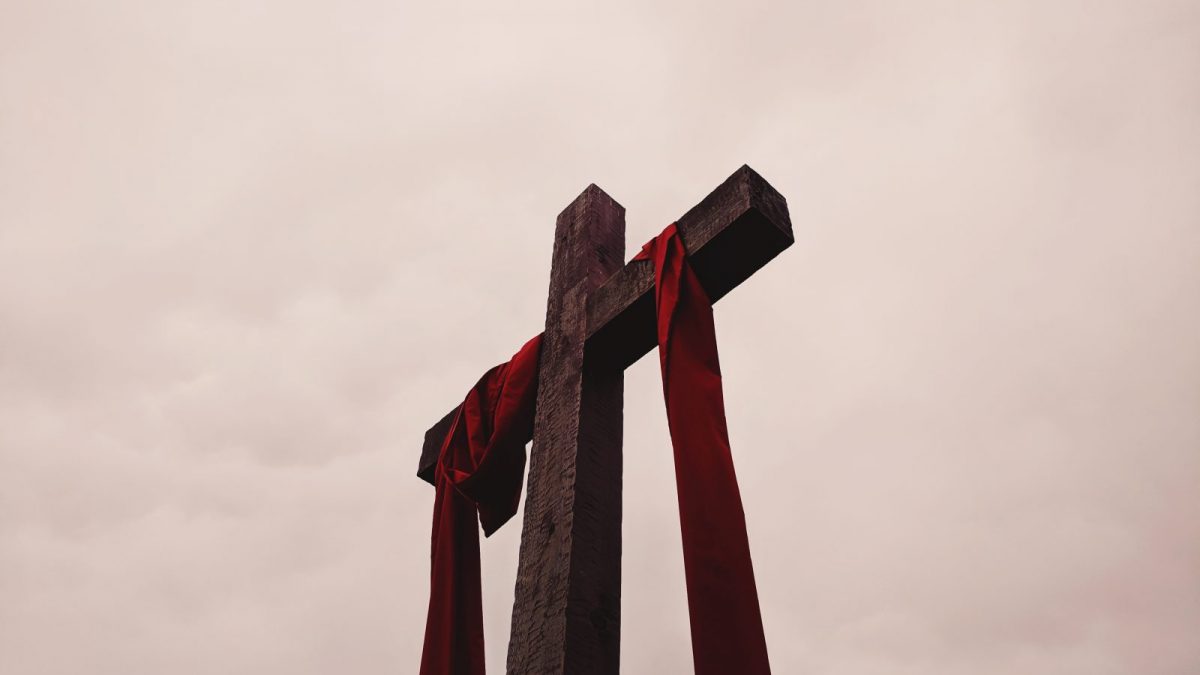 The image pictured here is the logo of Gun Central, one of the big USA corporations selling guns. After the two recent mass shootings, gun sales went up.

The Christian imagery is in your face: the shining white cross of the T, the biblical reference Luke 22:36 (where Jesus said ‘The one who has no sword must sell his cloak and buy one’.) The website heading shows a USA flag, ‘God bless America’, and a quotation from Psalm 33:12 (NIV): ‘Blessed is the nation whose God is the Lord, the people he chose for his inheritance’. To non-American Christians, wrapping up the promotion of guns in Christian rhetoric is astonishing, and arguably blasphemous.

Historically it isn’t just Americanism. It’s imperialism. Ever since there have been empires, there have been emperors claiming to rule on behalf of their chief god. These claims go right back to the invention of writing in Sumer 5,000 years ago, and no doubt predated even that. Emperors and their armies ‘pacify’ foreign peoples and ‘civilise’ them by conquest, destruction and, often, genocide. The Roman historian Tacitus reported the response of the Scottish chieftain Calgacus: the Romans ‘create a desert and call it peace’.

The claims of imperialists always contradict their actions. To ‘pacify’ is to imply that you want peace. If you want peace, don’t start wars. If you think foreigners need to be ‘civilised’, be civilised yourself – which you can’t be if you are attacking other people. Today it’s the USA which owns half the world’s weapons of mass destruction and drops incomparably more bombs than any other country. In the past it was others: the same imperialist ambitions, the same sense of superiority, the same rhetoric about foreigners being uncivilised and needing to be pacified. The rhetoric may begin as mere propaganda, but those who spout it come to believe it. Without believing it, it’s impossible to justify the atrocities committed.

Christianity is not immune. Constantine was the first emperor to be a Christian. Ever since then Christian emperors have claimed to govern on behalf of the Christian God and his son Jesus Christ. A good few New Testament texts have helped. When the early Christians called Jesus ‘son of God’, ‘saviour of the world’ and bringer of ‘peace’, they were citing the titles attributed to the Roman emperor and claiming them for Jesus instead. It was an act of political defiance: the way to bring peace and save the world was not the emperor’s way but Jesus’ way. 300 years later it was easy for Christian emperors to ignore the inversion of meaning and take the titles at face value: by declaring war on foreigners they were acting on behalf of Christ the Pantocrator, the ‘ruler of all’.

There are reasons for imperialism: power, profit. However, imperialists also need some kind of moral justification. For this, you have to believe three things.

First, you have to believe that the people you identify with are superior to the people you intend to rule. In the Middle Ages, Christians and Muslims were convinced that their understanding of God was superior to that of other people. Since the eighteenth century the sense of superiority, in western Europe and North America, has been heightened by Enlightenment theories: we are superior because of our science and technology.

Second, you have to believe that you have some kind of calling to rule. People who believe they have such a calling usually attribute it to their god. At the height of the British empire, Christian missionaries gave imperialists a sense that they were spreading Christianity around the world. American imperialists today claim to be standard-bearers for Christianity.

Third, you have to believe that your methods for enforcing your rule are morally justified. Medieval Christian rulers justified their militarism with a particularly iniquitous piece of doctrine: eternal punishment in hell for those who didn’t accept the authority of the Catholic Church. Anything in this life, however painful, would be better than eternal suffering. So by sending soldiers in to make you submit to us, we’re doing you a favour.

American imperialism today does not depend on that particular doctrine. At the height of the Cold War the main claim was that they were defending Christianity against Russian atheism. Those who knew how their nuclear weapons would operate were well aware that any nuclear war with the USSR would wipe out most of the world’s population. To justify that, one would have to believe that the defence of Christianity justifies it.

So the USA, far more than anyone else, has learned to imagine that the defence of Christianity justifies warfare on a scale that would dwarf previous wars. Inevitably, this produces a trigger-happy culture. The gun lobby is a product of American imperialism.

To call something Christian is only justified if it is consistent with what Jesus did, taught and believed. The American trigger-happy gun culture is an expression of American imperialism. Like all imperialisms, it is the opposite of what Jesus stood for.

To adapt another Americanism, we could ask ‘Which gun would Jesus carry?’ From everything we know of him, the Prince of Peace would carry none at all. True peace will come when individuals and nations put their guns down.