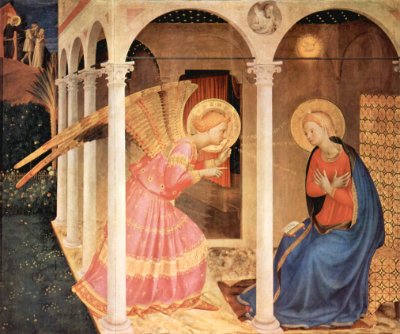 The Magnificat has been set to so much beautiful music that it’s easy to ignore what it says.

It’s part Luke’s story of the birth of Jesus. We love its gooey sentimentalism. We imagine it happening exactly as he described. This post is about what Luke meant, the point he was making. The Magnificat was his way of saying ‘This is what Jesus was about. This is what Christianity is about’. This post defends the Christian record in these terms.

Today we need to keep the world population down. The Bible reflects a rural society keen to keep it up. If you are a woman in the ancient world, your role is to marry a man and produce children. Delight in pregnancy is a common theme. Wives who don’t produce children are despised.

I quote from the NRSV translation, with apologies if you are more familiar with 1662 Evensong.

He has looked with favour on the lowliness of his servant.

Surely, from now on all generations will call me blessed;

for the Mighty One has done great things for me.

He has shown strength with his arm;

he has scattered the proud in the thoughts of their hearts.

Next, reversal of power:

He has brought down the powerful from their thrones,

and lifted up the lowly.

he has filled the hungry with good things,

and sent the rich away empty.

Finally, national reversal. At the time Israel was a severely oppressed part of the Roman empire:

He has helped his servant Israel,

in remembrance of his mercy,

according to the promise he made to our ancestors,

to Abraham and to his descendants for ever.

Perhaps we should not be surprised that in the 1970s the Magnificat was banned in Argentina. The Mothers of the Disappeared were using it it to call for nonviolent resistance to the ruling military junta. A similar ban was imposed in Guatemala in the 1980s.

Has it made a difference?

But was Mary right? After all, there are plenty of hungry people not being filled and rich people not being sent empty away. Do we enjoy the Magnificat because it takes us into a world of fantasy, completely different from the world we are in? Or has this vision actually helped make the world a better place?

Atheists usually argue either that belief in God hinders progress, or that progress is a Christian error anyway – because we have evolved to look after ourselves and our families, and we never get beyond that.

Defenders of Christianity say it has made a big difference, through Christians doing what they thought was the will of God. My aim here is to describe the difference.

Early Christianity in its context

Here’s a question for you. Suppose you’re going for a walk along a quiet country lane. There is nobody else around. In the hedge you notice a live baby. What would you do?

I guess you would probably do something. You wouldn’t just walk on by.

In Mary’s day, in the Roman empire, leaving unwanted babies on the roadside was very common. One local researcher has calculated that about a third of live babies were being dumped this way. At the time the most popular entertainment was watching gladiators fight each other to death.

Christians didn’t abandon unwanted babies. They created convents for bringing up children, and for girls running away from marriages they didn’t want. When destitute mothers simply couldn’t afford to feed another child, they offered an alternative to an abortion: food at the Eucharist.

This was quite new. Nobody else had ever done it. So why did they do it? To me, this is the core of Christianity.

They had inherited from Jews a belief that everybody in the world has been created by the one God. God created us to bless us and loves us. God has provided enough food for everyone to eat, so nobody needs to starve. Whenever somebody goes hungry, that is contrary to God’s intentions.

For Jews this belief was limited by the idea that Jews were a chosen race. For Christians race didn’t matter: God loves everybody equally.

Out of this theology Christians derived three principles that are still with us.

1) The sanctity of life. Life is sacred.

What this meant was something like this. When you have been to the toilet you wash your hands. Why? Because of germs. If you are like me, you don’t have a clue how germs work or what washing your hands achieves, but somebody knows, so you do it.

Sacredness, sanctity, is a bit like that. We live surrounded by things we don’t understand. We have a sense of awe and wonder, a sense that our lives matter, that life has a point. We humans can’t explain these things. We don’t understand them. But God does. So the things that express that ‘beyond’ are special to us. We set them apart, we protect them. They become sacred to us.

2) Human rights. It is right for everybody to have enough food, and belong to a loving community, because that is what God has made us for. I described this in greater detail here.

3) Equality. God loves us all equally. Therefore each of us is just as important as everybody else. No more, no less. Here’s the Christian Lactantius, writing just after 300 AD:

God, who produces and gives breath to men, willed that all should be equal, that is, equally matched. He has imposed the same condition of living on all. He has opened wisdom to all. He has promised immortality to all. No one is cut off from his heavenly benefits… In his sight, no one is a slave; no one is a master. For if all have the same father, by an equal right we are all children. No one is poor in the sight of God but he who is without justice. No one is rich, but he who is full of virtues… For this reason, neither the Romans nor the Greeks could possess justice. For they had men differing from one another by many degrees: the poor and the rich, the humble and the powerful, private persons and the highest authorities of kings. However, where all persons are not equally matched, there is no justice. And, by its nature, inequality excludes justice.

In the 18th century these principles got secularised. Intellectuals were determined to keep them but remove all references to God.

The trouble is, once you take God out of the picture, you can no longer explain why they are true. They became unjustifiable.

The sanctity of life has been hit hardest. People still talk about the sanctity of life, but if you look up ‘sanctity’ or ‘sacred’ in a dictionary, it will usually tell you that it’s a religious term. In other words, outside religion it doesn’t mean anything at all.

Human rights have gone the same way. In the 18th century their defenders thought they existed self-evidently. In the 19th century Jeremy Bentham said they were ‘nonsense upon stilts’. Now, campaigners still think they exist, but if you ask what a human right is and how we know it exists, you will have to turn to moral philosophers. Even the ones who defend human rights don’t think they actually exist. Nobody has ever seen a human right. They only think that if we all agreed a set of human rights, we would get on with each other better. Thus they treat rights as a useful fiction.

As for equality, all our equality and diversity regulations have become all the more important because anybody can point out that we are obviously not all equal.

If you watch the news on television you can see what I mean. Every time there’s a report of jobs being created or lost, there is some comment about the effect on the economy. You may occasionally hear about whether the jobs are doing something needed, or damaging the environment, but that’s less common. The standard comment is about the economy.

Logically, if the purpose of human life is to contribute to the economy, then we need more billionaires, and everybody on welfare benefits morally ought to drop dead.

Of course no public figure actually says this. But if we look at what is actually happening we are getting more billionaires, and with the benefit cuts the number of people dying of starvation and hypothermia is increasing. The latest report from Crisis says that in the last 8 years homelessness in Britain has doubled. Even if no government minister positively intends it, it is the result of government policies. This alternative value judgement about human life is having massive effects.

So this is my case for Christianity. An older set of beliefs about the value and purpose of human life is losing influence. It was inherited from Christian theology and adopted by secular culture. Secular culture cannot explain why it is right. It is now giving way to a very different set of beliefs, much closer to the pagan Roman empire of Mary’s day when life was cheap.

Mary’s reversals express what Luke meant by God’s justice. The first Christians made them happen; never perfectly, and for much of the time those principles were heavily watered down; but they still had a massive effect. Countless campaigners today still appeal to them, even if they have no idea how to make sense of them or where they come from. They come from those beliefs about God that inspired the early Christians to do what nobody had done before.